Today, I'm going to finally dip my toe in the water of something I've wanted to do for a long time. I'd wanted to do this with Michael Caine film appearances- and I may yet- but tonight, it'll be a bit simpler. I'm going to draw a network graph, showing the relationship between band members of the Grateful Dead and a couple of their solo and non-Dead projects. Information is from my head or wikipedia, reflecting the most recent band lineups.

I've created data frames for RatDog and the Other Ones as well, but the code and results are not shown. Next, I'll code a helper function to create relationships between band members.

With that in place, I can create relationships and then rbind the results. I tried adding a color column for a musicians instrument, but haven't had any luck in being able to apply it in the plot. Suggestions are welcome. 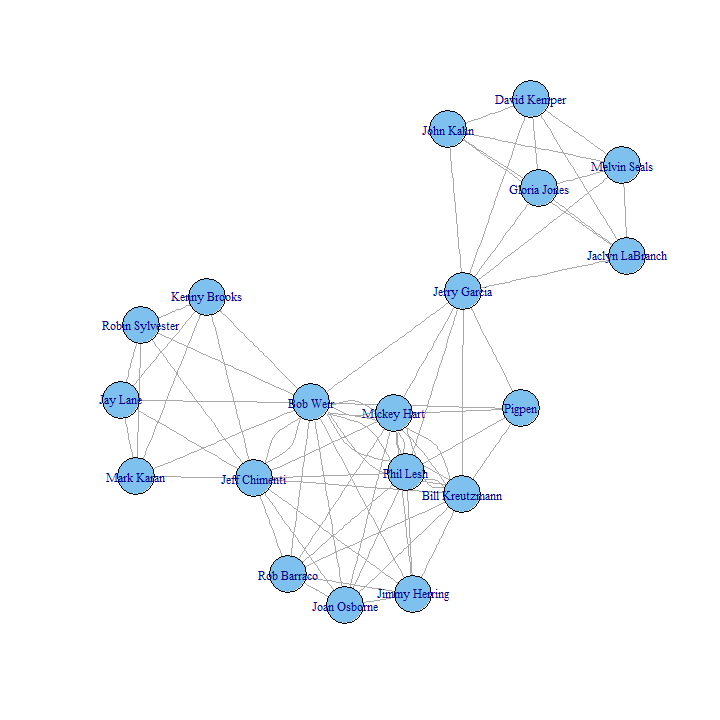 Note the mashup of Bobby, Mickey, Bill and Phil in the center. They've had a lot of crossover post 1995. If I didn't have to work tomorrow, I'd probably spend the next few hours playing with this. Developing a chart of all the permutations of Yes, Asia, King Crimson, etc. could take the better part of an evening.